There are elements of Payge’s story may be familiar to many artists in our area. It is a stellar example of a born artist’s resilience and determination to pursue what many may perceive to be an unlikely career path. Fortier was raised on a small cattle operation outside of Dawson Creek, BC. Creatives are found on both sides of her family including spinners and weavers, as well as skilled builders and draftsmen. However, her family’s blue collar background necessitated that they express their creativity through practical projects such as quilts and garments.

Payge inherited this inner drive to create, and describes herself as an artist in her core. Her artistic spark ignited as early as she can remember. As a young child, she was “mesmerized” by her older sister’s drawings, which she worked to emulate, and soon enough she was trading her drawings at school for better lunches. At nine years old, she took her first art class at the Dawson Creek Art Gallery, where she discovered her voracious appetite for all things art-related. 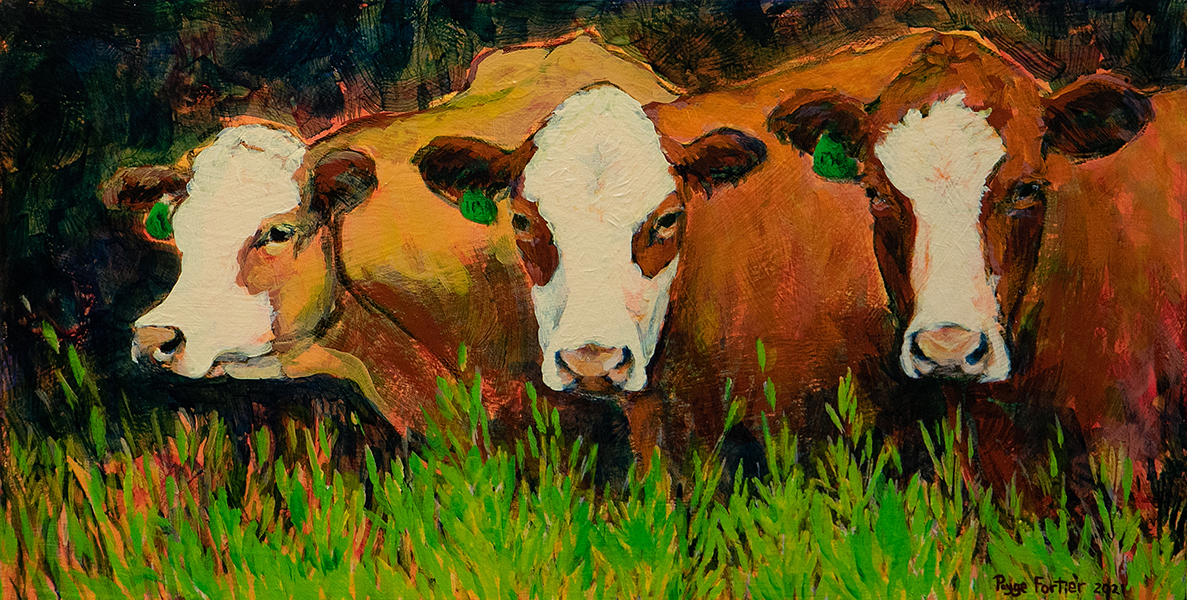 Thereafter, she attended every art class she could throughout her elementary and high school years, after which she enrolled in Laine Dahlen’s Visual Arts Program at Northern Lights College, which was sadly discontinued in 2014. Laine’s program was pivotal for so many local artists, including Payge and myself. Its absence highlights the dire need for post secondary arts education in our community.

After completing the Northern Lights program, Fortier transferred to Alberta University of Arts in Calgary. This was a difficult process for her, as no one in her family had pursued post secondary education before, let alone art school out of province. Navigating university and city life on her own was overwhelming for the artist, and she returned home before completing her second year. Payge remembers her time at Northern Lights fondly, and preferred NLC’s small class sizes and hands on approach to AUAC’s theory-based curriculum, stating, “Just because it’s a big institution, doesn’t mean it’s better quality”. Leaving Calgary in the rearview mirror, she was determined to forge her own path as an artist in the North.

Soon after returning, she began working at Picture It! Custom Framing, a position that situated her well within the local arts community, and introduced her to its many vibrant creatives. Ever industrious, Fortier bought the Picture It! in 2011, but found it a struggle to maintain her art practice while running a business. She describes this time as a somewhat dormant period, wherein she could only sporadically attend painting classes after work. She was able to practice techniques, but because of time constraints, she felt she was not able to produce work she could authentically call her own.

After becoming more established in her business, Payge was able to regain her artistic footing and created a body of work for Peace Roots, a group show with Caily Oldershaw and Justine Bouchard held at the Dawson Creek Art Gallery in 2019. Since the pandemic, Payge has moved her business to DCAG, which has allowed her the time and freedom to push her practice further.

As the Gallery’s 2021 Bin Top Artist in Residence, Fortier has created Bos Taurus, an impressive series celebrating the way of life of traditional cattle ranchers in the Peace Region. In Bos Taurus, Payge solidifies her own visual language using expressive brush strokes, bold colours and clever layering. Through her skilled hand, Fortier brings out the liveliness and unique characteristics of her bovine subjects. Rendering them with a gentleness and warmth that originates from the true affection the artist holds for these animals, which are so central to the lifestyle and traditions of her family and community. 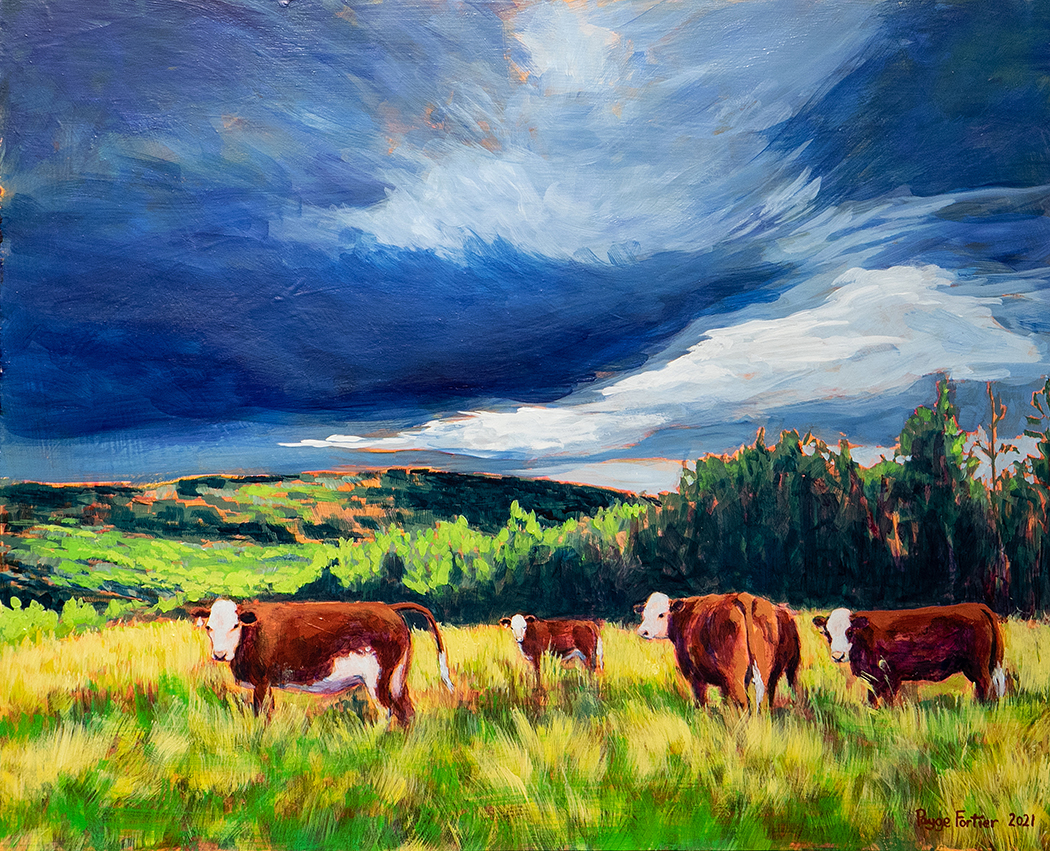 “Community Pastures”, acrylic on board by Payge Fortier. Photo by kit fast.

When Fortier encounters an obstacle in her painting, she reverts back to her drawings, which are the foundation of her art practice. Likewise, when she experiences hardship in life, she holds fast to art, which is her guiding force. “Art has always been who I am,” states Payge, and it is with this clear drive and surety of self that she is bound to find great success in her artistic endeavours.

Bos Taurus is on display now at the Kiwanis Performing Arts Centre until June 4th. KPAC is open to the public during regular hours, so please stop by and experience the show in person.