The Making of Uncertainty: Karl Mattson and Luke Gleeson

This week, I caught up with artist duo, Rolla’s Karl Mattson and Luke Gleeson of Tsay Keh Dene First Nation to learn more about their piece Uncertainty, which is now installed at the Douglas Botanical Gardens at the University of Northern British Columbia in Prince George.

Karl has a long history of creating public art, as several of his trademark metal sculptures grace the city of Dawson Creek, including the Pioneer Surveyor Sculpture placed in the traffic circle and the Workers Memorial Sculpture found at City Hall. Gleeson is a musician by trade and a filmmaker. His directorial debut The Scattering of Man, which chronicles the displacement and ongoing struggles of the Tsay Keh Dene First Nation, whose communities, sacred sites and hunting grounds were destroyed to make way for the Williston Reservoir and WAC Bennet Dam. You can find more information on the project here. Gleeson also collaborated on the soundtrack for the documentary Walking With Plants, which was featured in Toronto’s Hot Docs Festival. Uncertainty is Luke’s first foray into sculpture, as well as the first collaborative effort between the two artists.

The University of Northern British Columbia had released a call to artists requesting proposals for a metal sculpture to be installed in the entrance of their botanical garden. The two longtime friends had considered collaborating for some time on some major projects, and chose to respond to UNBC’s call to test their new creative partnership. Their proposal was accepted, and they began work in early 2021.

According to UNBC’s specifications, the final design had to include a reference to botanist David Douglas, which is embodied in an abstracted Douglas fir tree. One of Luke’s creative contributions was the steel caribou antler shape that made up the foliage. While Lead Artist Karl had been working for some time with suspending materials as a means of representing potential energy, hence the boulder bound by a network of metal roots. This unique combination of elements speaks to the possible creative outcomes when artists work together. For the intensive metalwork the piece entailed, the pair built a forge at Karl’s studio with the guidance of Youtube. The forge is a great new asset for the artists that will undoubtedly be put to good use in the future. 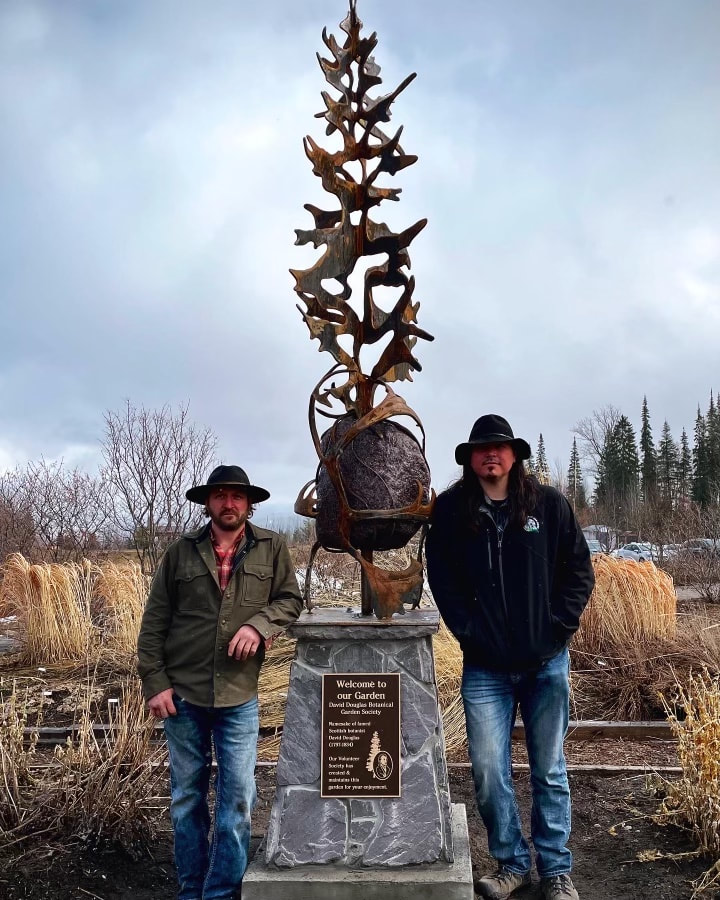 For the concept of the piece, the two’s ideas coalesced through a shared concern for the environment, as both artists live in relatively remote areas of northern BC which are heavily impacted by multiple industries. Concern about the changing environment due to climate change is a central issue in both their practices. Gleeson spoke of the projected changes to the forests around his home community of Tsay Ke, and how southern species like cedar are expected to migrate northward as the temperatures rise, forever altering the landscape.

These concerns are echoed in the undulating shapes of the caribou antlers that give Uncertainty a sense of motion and instability. The antler forms swirl around the locally-sourced boulder, which again mimic movement, and speak to the stored potential energy within the suspended stone. The metal components of the sculpture were treated with vinegar and peroxide to speed the weathering effects of the environment, and the visible alterations that will occur over time as the sculpture rusts. These concepts are perfectly fitting for the botanical garden, which cultivates native northern species. The projected changes to the environment will make the climate less hospitable to our local fauna, which means that the species inhabiting the garden will vary over time. 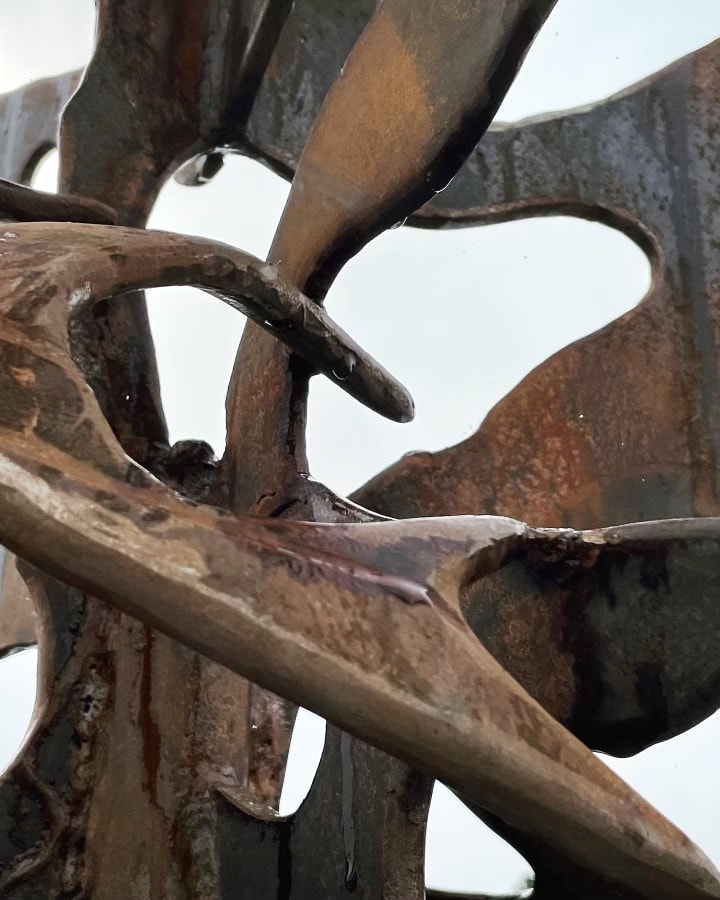 A detail of Uncertainty

Mattson’s advice for artists hoping to break into public art suggested that they keep an eye out for calls to artists, and put themselves out there. He also noted that one opportunity leads to another. As an example, Mattson’s sculpture Lost, which was featured in Penticton’s Art Walk has now found a permanent home in the Okanagan. The visibility he garnered down south has lead to further commissions and opportunities.

Karl and Luke are collaborating on several new projects, including a short film depicting the making of Uncertainty. Which is a work that reminds us of how the things we take for granted as permanent, like stone, steel and forests are in fact subject to change due to humanity’s actions.